YES WE ARE OPEN

Please note you must wear a mask when in our store

We know that people are concerned with the spread of COVID-19. We are keeping up-to-date with current health measures and safety protocols to ensure the health of our staff and customers and we are taking steps to ensure the continued health and safety of everyone in our store.

If you would like to phone 250-478-0914 or email us dragonflybooks@shaw.ca we will pick out the books for you to pickup.

To check our inventory scroll to the bottom of our web site https://dragonflybooks.ca/ where you can look up a book by author and or title.

If you would like to see photos of some of the books go to https://www.abebooks.com/ under sellers and look up Dragonfly Books.

If we can’t find what you are looking for we will add you to our request list and let you know when the book comes in!

When ordering books from our web site payment must be made via bank e-transfer or in person as we only accept cash or Interact.

If you wish to use a credit card to purchase books from us, please see the link below to take you to our inventory listed with AbeBooks.com.

The story has a nightmarish excitement and maintains a brilliant pace . . . the best of its kind this season.” – Detroit News

“[S]pine-chilling . . . a far-reaching plot linking the horror camps of the Nazis, the frozen wastes of Russia and the work of British Secret Intelligence. . . . [T]his is ‘must’ reading for horror fans.” – Calgary Herald

The old whimsical phrase “there’s fungus among us” might not sound so amusing after a reader finishes John Blackburn‘s first novel, A Scent of New-Mown Hay. A densely written book from 1958, and is a curious combination of sci-fi, horror and spy thriller. A Scent of New-Mown Hay certainly does contain its horrific elements, although the less said about them, the better. I’d hate to spoil any surprises for prospective readers.

Suffice it to say that the book opens in 1954, with General Kirk, of Britain’s Foreign Service Intelligence, being informed that large sections of northern Russia have been reportedly evacuated and quarantined. Kirk, who would go on to figure in several other Blackburn novels, begins an investigation, and it is soon revealed that an ex-Nazi scientist may or may not have released a deadly, mutating organism into the world. The bulk of the novel details the race that Kirk and some dedicated biologists engage in to find the crazed scientist and stop the spread of the plague, with the action transpiring on the White Sea, in seedy Hamburg and in the English countryside. I won’t divulge the nature of the deadly problem, but let’s just say that those folks who have seen the 1963 Japanese thriller Matango will have an inkling of the sort of crisis that Kirk & Co. are dealing with here. The book moves along rapidly, and contains some memorable set pieces, including a fog-shrouded run-in with the mutants on the Russian tundra; the final appearance of Mrs. Baker, a shoplifting British biddy who’s been afflicted with the contagion; and the finale itself, with our heroes facing off against those responsible for the scourge.

It was nice to meet Sonya, Ali, Chris, Tristan and Braden. What a fun bunch! Sonya was really happy to purchase the Sanderson, Brandon book that she has been looking for.

Glad we had some Berenstain Bear books for Paul to go with the stuffed bear he wants to give to a new member of his family.

So nice to meet Ryan & Kristen. Glad we had some Nancy Drew, Geronimo Stilton, comics/graphic novels books for them to purchase as well as local author Joshua Gillingham’s new book The Gatewatch.

Always happy to see our dad John and have cookies and tea with hm.

Katharina from Germany wanted to send her friend Miriam the gift of books. W found her 3 books we thought she would like.

Was so nice to meet Taylor, she got a couple of great new books.

It was nice to meet Neil and his son Sasha, so glad they found looks of books!

Bobby was happy to find some books for himself and his grandfather.

It was nice to meet Jarret and Becca, glad they found books to read.

Canada: The Case For Staying Out Of Other People’s Wars by local author William S. Geimer ($15.00).

Canada did not “come of age” on the world stage at Vimy Ridge  Her wars have always been fought based on the interests  of of the U.K. or the U.S., never on an independent assessment of Canada’s own interests. That dangerous and unhealthy dependency continues today. The proof is in the stories of all Canada’s wars as told in Canada: The Case for Staying Out of Other Peoples Wars, by army veteran William Geimer. 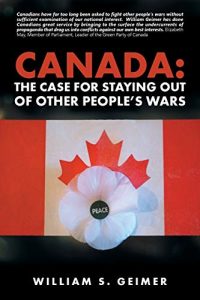 So nice to meet Sarah and Bonnie. Glad they found so many great books to purchase!

After her parents’ divorce and the discovery of a series of cryptic notes left behind after her father is killed in an avalanche, Harking Thompson struggles to come to her own understanding of love, loss and what really matters. Caught up in a battle to save a mother grizzly bear and her cubs, Harking’s fight to protect the wildlife and wild places she loves teaches her a brutal truth: sometimes saving a life might mean losing another you love even more. 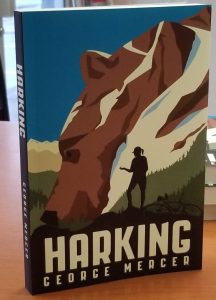 Sailor Anna loves sailing the seven seas. Join Sailor Anna, her brother Kash and his dog Max on their first journey to the Arctic Ocean to explore new places and search for marine life along the way. Watch out for Captain Catfish as he will try to steal their dads ship called the Singing Mermaid at every turn. 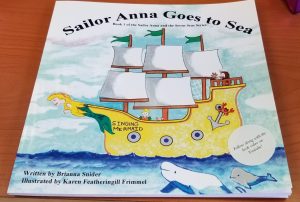 The Gatewatch by local author Joshua Gillingham is now available ($20.00).

Torin Ten-Trees and his closest companions, Bryn and Grimsa, set out to join The Gatewatch and become trollhunters. When a troupe of meddling dwarves throws them off course they are captured by trolls and taken as prisoners to a secret gathering deep underground. There they learn that an ancient giant has crowned himself king of the trolls and plans to utterly destroy The Gatewatch. Their perilous journey back to the land of sun and stars will stretch their strength to the limit, strain their wits, and demand an unspeakable sacrifice. But will it be enough to defeat the Troll King?

The Gatewatch is a young adult fantasy adventure inspired by the Norse Myths, the Icelandic Sagas, and the unforgettable landscape of the Rocky Mountains. Myth, history, and imagination fuse together in an epic troll-hunting saga written for young adult readers. 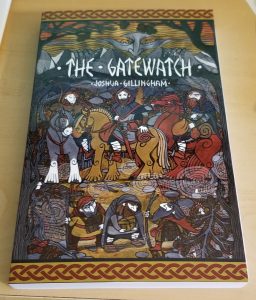 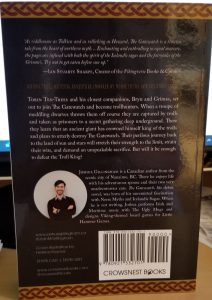 So glad to see the book we sent to Sarah in Australia arrived. Really great to see she already cooked something from it!

We now have local author Grace Bogaert’s books Shiver and The Girl from Mena Creek. ($15.00 ech) 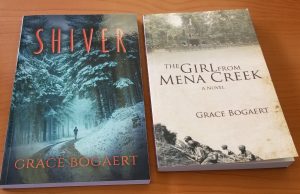 Rescuers find five-year-old René frozen on the lake outside his family’s home. He is rushed to hospital where his body temperature is restored to normal and his heart starts pumping again. But he lingers in a coma. His parents, Anna and Xavier, pray for his recovery, but René’s doctors say there is no hope and recommend removing René from life support. In a last ditch effort to save her child, Anna begs her aunt, a native spiritualist, to perform a secret shamanic ritual, making a bargain with the spirit world to restore her son’s life. At first it seems that the ritual has not had any effect, but when the ventilator is switched off, the boy begins to breathe on his own and recovers fully. Anna is overjoyed, but unease soon clouds her happiness. She suspects a connection between her son’s revival and a serial killer she once helped go free. Strangely, the killer’s talisman, a carved figurine of a woodsman, keeps turning up—even after the object has been burnt in the fireplace—a sign of the persistence of evil and of the frightening odds Anna faces. Even though she knows the killer has since died, she feels his presence lurking everywhere, and she lives in trepidation, knowing his reign of terror is not over.

In 1927, Talia, a young Spanish girl, travels to Australia where her father has been eking out a living cutting cane.  After several years of bracing cyclones, disease, and poverty, Talia’s family moves again to another part of Far North Queensland. This time, they settle at Castillo Candela, the wealthy domain of fellow Spaniards, and life becomes a little easier.  It is also at this beautiful estate, nestled along Mena Creek, that Talia first meets Alwyn, a mixed race Aboriginal boy.  Initially, Talia finds him a little strange but after working side by side, she grows to understand him, and eventually to admire and love him.  But when she and Alwyn decide to get married, Talia is dismayed that her family will not allow it, even though Alwyn has proven his worth time and again.  In a desperate move to gain Talia’s parents’ approval, Alwyn joins the Australian forces in the battle of the Pacific, but soon disappears following his capture by the Japanese.

In her loneliness and despair of not knowing Alwyn’s whereabouts, Talia looks for solace in painting the landscapes of her adopted homeland, clinging to the hope that someday Alwyn will return.